Nice to see the group picture! Wish I could have been there and I can’t wait to see everyone again at the next WC!

Grande Fabio Fichera, that is an outstanding performance by the 2019 World Champion. 9-2 against Gianni???? 16-4 against Alessandro?? A double figure average while conceding less than two goals per game against such quality opposition? Just... wow! And what a tournament by Tommaso (first win against Gianni!) and Luca as well!

Respect for Cornelius, Jorn and Frank, the first foreigners to travel abroad for a Kick Off 2 tournament since the pandemic started.
Remember, remember, the 4th and the 3rd of November

alkis21 wrote:Grande Fabio Fichera, that is an outstanding performance by the 2019 World Champion.

I didn’t realise that he was Thor! I remember him a little taller than that, definitely speaking a better English!

Aaargh I meant 2018, of course! I need to update the Rankings, to get my statistician's juices flowing again.
Remember, remember, the 4th and the 3rd of November

To add to my write-up of the weekend;

Monday, after walking a bit around town, getting some gifts for my kids, I found a park and just enjoyed the sun for a couple of hours. Then, I got to go with Gianni and his son Ettore for Baseball-practice. Really nice to see the kids playing. I've never been that close to anything related to baseball before, and have to admit I really liked what I saw. Interesting sport.
After that Mariachiara offered dinner, and who are we to decline? Then we went over to the Kick Off House (tm) to visit Giannis mother. And hands down, she wins. She is the most beautiful, sweetest, warmest person on the face of the earth.
We ended the day by visiting Sandro in his office/gameroom, watching him play a flight-sim. Impressive set-up!!!

Come Tuesday, it was time to go home. And my trip was a 3-legged one; Milano-Frankfurt, Frankfurt-Oslo, Oslo-Tromsø. But due to delayes in Frankfurt I eventually ended up with a fourth leg; Oslo-Bodø, Bodø-Tromsø, leaving me to arrive at my house at 2315 at night. With my wife having to leave the next morning at 5.15 to go to Oslo, and I was to go to work at 8 myself. And having to get the kids ready for school...

So now, back home, I just can't wait for the next.

This was really an impressive tournament!

Well done to all players, especially to those who travelled from far away, showing the rest of us that KO2 is still here and is something worth flying for.

Above all congratulations to Gianni and his coorganizers for keeping the KO2 scene alive. Wether we were there or not, I truly believe that all KOAers must feel grateful that thanks to the will and the work of these milanese stars 2021 will not be an empty KO2 year. Big thanks, and hopefully in 2022 everything will be bigger and better!
____________________________________

Torchiador wrote:I didn’t realise that he was Thor! I remember him a little taller than that, definitely speaking a better English!

I think Fabio’s English is better than my Italian.

By the way, the Holy Shield has now spent enough time in the USA to apply for permanent residency… She likes it here!
Fred/Typical
Top

It's been a lovely week end!
As said by Jorn already, Friday night when we met Frank and Cornelius, we had some somehow a world cup feeling, I'm sure it's something you know and miss very much: when you arrive at destination and one after another, you see to pop up KOA faces right before the Friday night world cup dinner and draw. you have that right feeling.
Thank you very much dudes, without you that wasn't definitely the same. it's been a pleasure to meet Petra again, we had a very nice day all Together in Bremen (the formation with Frank, Cornelius was somehow the same) and we re proposed again Sunday morning before they started the return trip to Frankfurt.
Special thanks to Jorn to come here spending so much time to reach Milan from the far North, it's been memorable, something that was really needed and for long time waited.
My HUGE thanks to Cousin Alessandro who spent half of Friday to convert his office in a tournament room. allowing us to make ourselves at home there. Sure the location wasn't that professional but we had 7 Amiga running and we played the first 120 official matches of the 2021, about 2 years after the last tournament that actually was the Bremen world cup. The idea of the Mobile Amiga station was simply BRILLIANT and the station was always busy.
About the tournament: we could name the tournament Rust and Dust and the most of us were really out of practice for long time. Most of the players but not all the players: the Kick off on line people were very well trained instead and their good performance should be a parental pride of Steve Camber and surely prove the goodness of his software.
Luca is a bloody good player, it will be a sure headache for the Athens 2022 seeding engineers. in less than 1.5 years playing online he showed top class skills on every corner of the pitch from defence to offence, we will see how much he will be able to improve in the next 12 months.
beside this he is also a very nice fellow and for the joy of the KOA, fluent English.
Amazing performance of the Lorenzos: they seemed the guys who showed up in Birmingham world cup 2011. if you remember, "Tommaso" reached the big screen and he had also half foot in the final after drawing the first leg semi final with me. I knew that in his best match he could beat me. that match eventually arrived so congratulation to him for his amazing performance. considering he was mostly out of practice, that is even more impressing.
On the other side Lorenzo was super trained, and all his training payed off, like Birmingham, one of his best performance ever.
I lost with Tommaso at mid of the tournament and the only way to win the gold was to win all the matches because Fabio was rolling over anybody else and it was quite difficult he would have lost some points in between. But after my draw with Luca (splendid match of Luca), Fabio won the tournament by math so I played our last match with Fabio but he had the Italian gold medal under his belt already.
Both of us had the excuse that there was no motivation to be able to play at the best. being me the one who lost the match, I'm the one using the excuse!
In past IC I have been quite lucky, I won a couple of titles for goal difference or best score among players right over Mario and Fabio one time each so it is just for a matter of inches that I was able to keep intact my streak for so long.
I must say on my side that in all these years I have been able to defend the title also with titled players like Spyros, Alkis, Dagh, Andy and many other who have been here to challenge and to learn from the kick off house and have fun together.
So, after 17 years and 14 Italian Championship straight, Fabio beat the streak and for the first time since 2004 we have a new Italian Champion! Congratulations to Fabio!
Well done! he showed up a killer instinct in front of the goal and an amazing defence.
Enjoy the gold medal! one week is passed already

in the end I want to thanks all the participants as we had a very lovely Saturday of fun together. to make this everyone is determinant and important. special thanks to everyone who helped bringing hardware from home.
we had 7 perfect stations right because you brought your best stuff here. than you very much.
thanks!

Just for the records: We were supposed to play in 18 players but Sandro dropped out one day before (he eventually joined the lunch with us) and Maurizio quit during the tournament so we cancelled all the matches he played (all defeat but a draw).
Maurizio.

Here's the pictures!
enjoy!
btw this is the reason forums are dying: 15 minutes to post these pictures! vs 15 seconds to post on FB 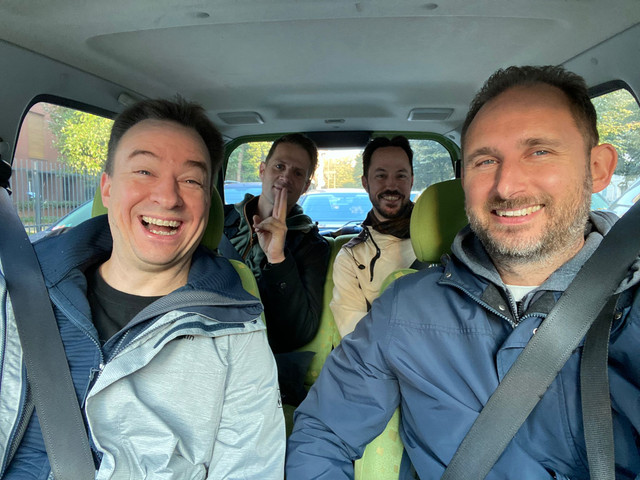 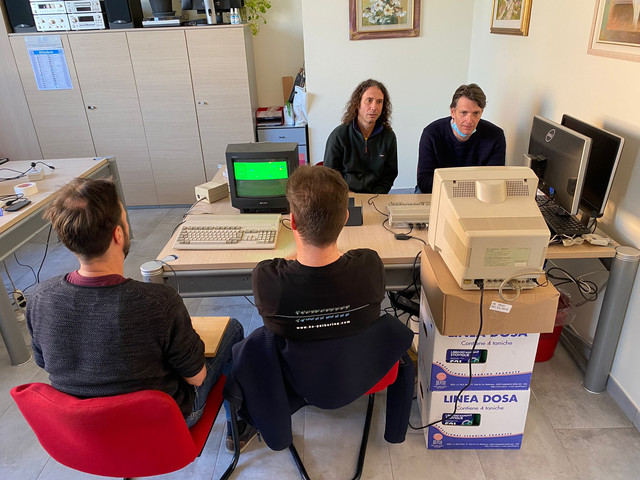 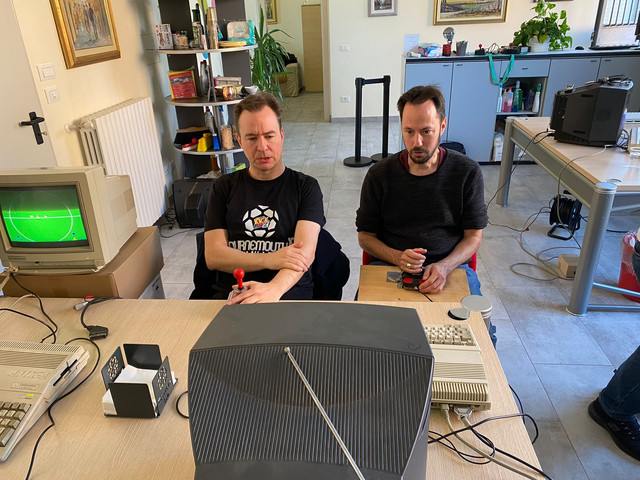 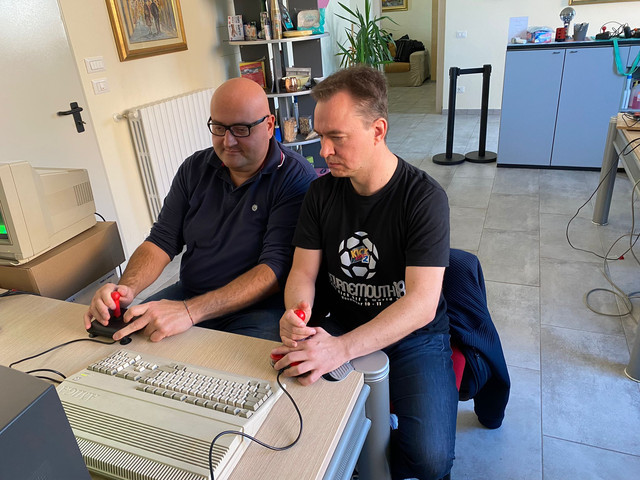 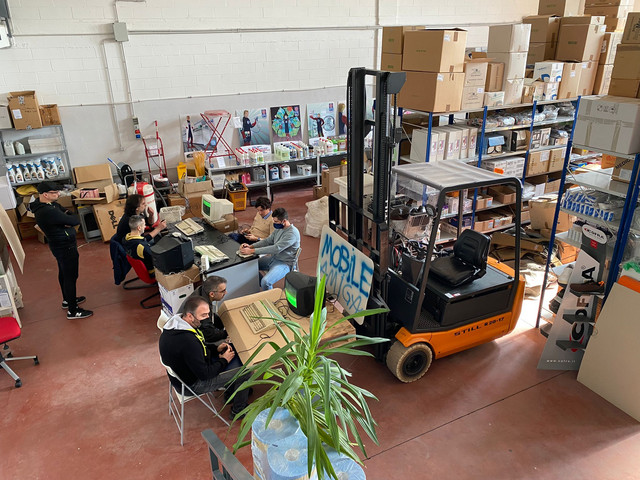 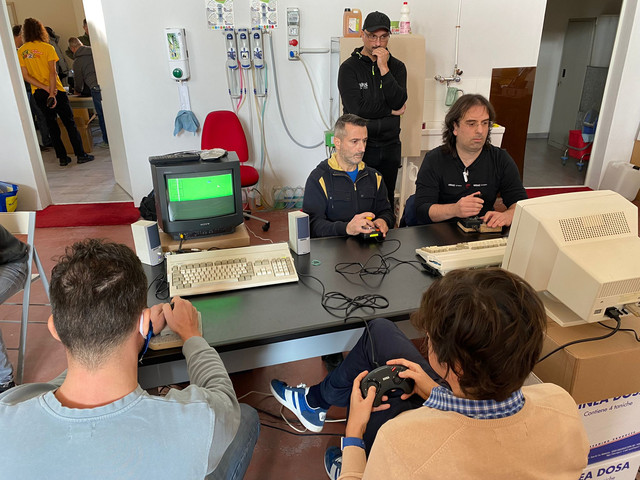 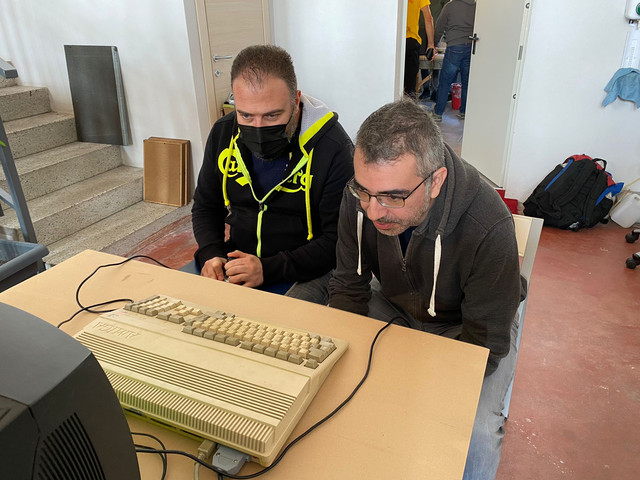 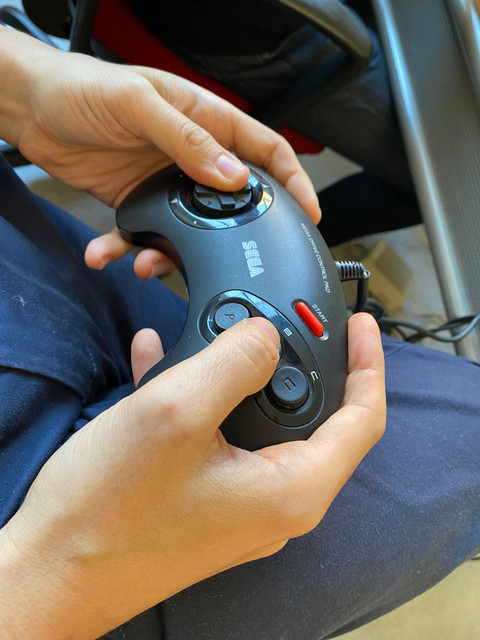 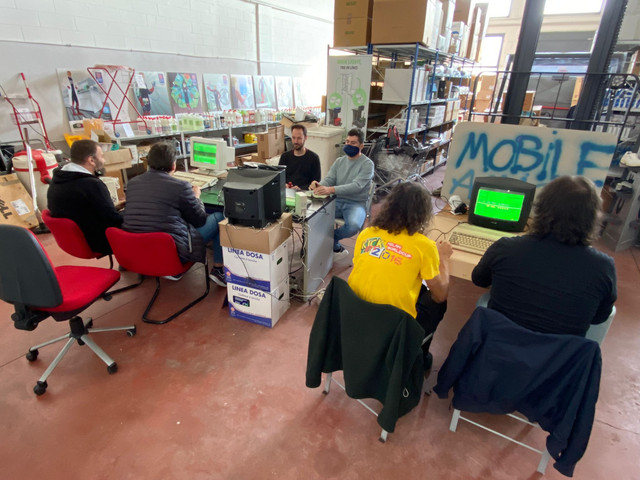 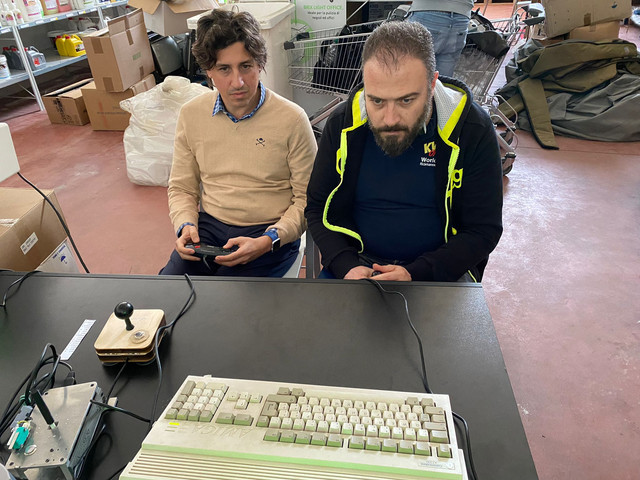 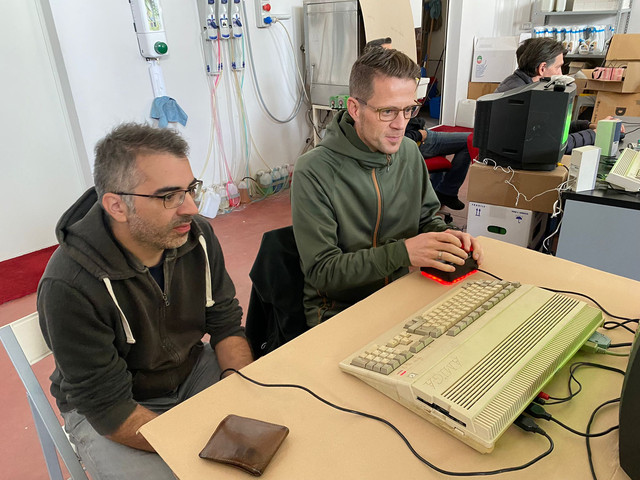 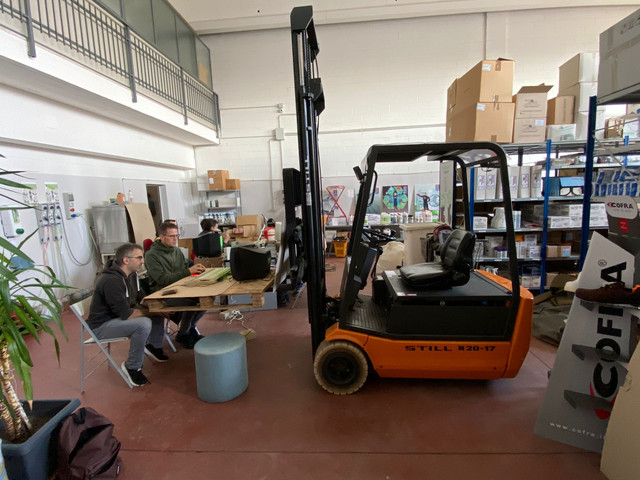 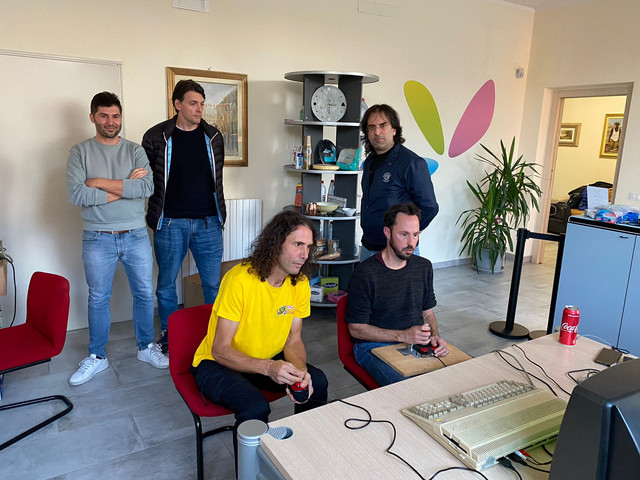 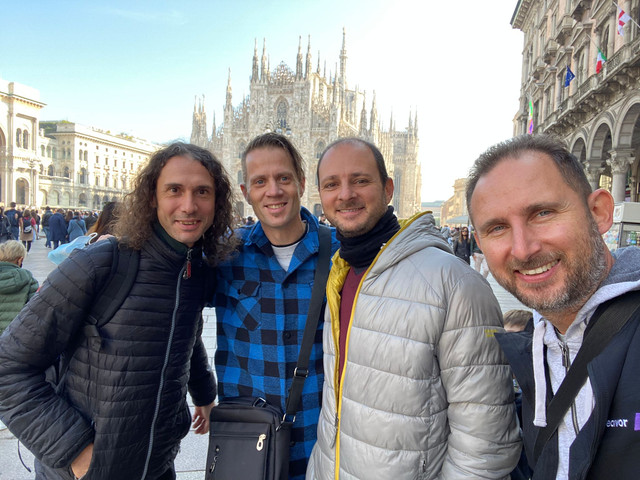 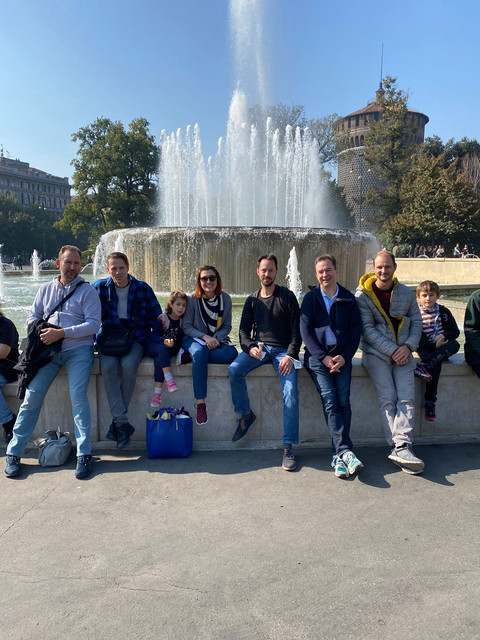 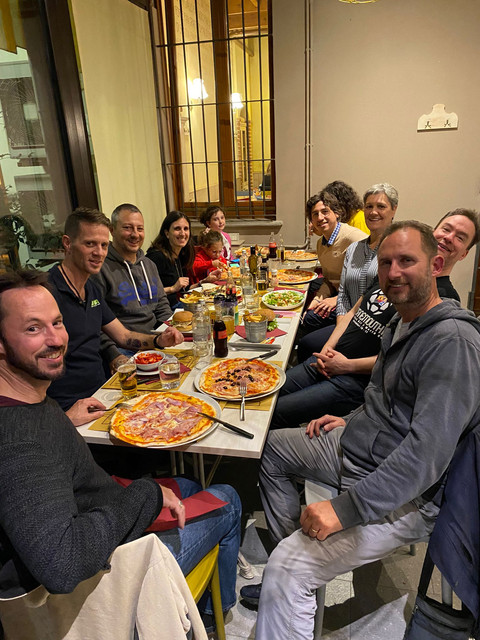 Thank you for the write-up and the pictures, I really enjoyed them!
Remember, remember, the 4th and the 3rd of November

Congrats to all, very impressive performance by many. Fabio especially seems to be unstoppable

Please bring the Mobile Amiga to every future world cup, that is pure genius

Users browsing this forum: No registered users and 26 guests