Talk about EVERYTHING related to Kick Off 1 + 2.

(thanks Freshy for the continued hosting support

Goals, On Target and Shots graph.
The lowest line is Goals.
The middle line is Shots on Target (missing due to pitch walls in this case).
The upper line is Shots.
Here you can see Team A had a slow start but the goals started to come in the 2nd half, and Team B started out well but could not maintain that success although he maintained the lead.

Shocking lack of lobbing going on here. All goals are shot from within the penalty box.

Was a treat to give this a blast at the UKCs. The post match analysis initially drew gasps and exclamations and later generated discussion and laughter. The missile command-style goal map really is a thing of ko2 beauty!
All the goals, the stats, the stories & more from the KO2 WC 2011 - please click here

As usual, I will steal a copy of the new version in the WC

Here's an example of the thing in action so you get a better idea.

I've got used to the shots graph now and can read it easily. No problem seeing where periods of success and failure lie.
Are you suggesting it gets divided up into 10 sequential graphs all stuck together, one for each minute? Maybe more like a bar chart?

I'm open to suggestions, I'm no stats guru after all!
--

I like alex's suggestion...yes he means put a dot for each 5 minute interval or something and then join the dots, blue and yellow lines will the clearly show who was on top during which periods....i like that a lot
No longer the only UK based Liverpool, Nottingham Forest and Crewe supporter in the whole of the KOA!!!
Top 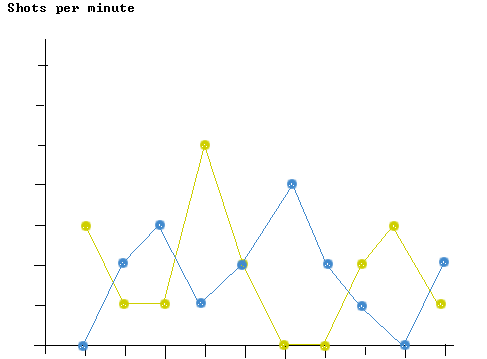 Looks good and should be easy enough to do.
I'll probably add it in - the more graphs the merrier, but always maintain a quick exit for those who don't give a damn

how about a graph for each player showing SHOTS, SHOTS ON TARGET and PASSES

No longer the only UK based Liverpool, Nottingham Forest and Crewe supporter in the whole of the KOA!!!
Top

Users browsing this forum: No registered users and 3 guests