What a great Kick Off 2 World Cup weekend. I'll post my story and thank yous later, but there is one important item first: we should recreate the karaoke and put it on a CD.

So Lee started - not sure what song, then it was me: Milkshake - Kelis, Andy: Love Me Tender - Elvis Presley, Jacob: Disco 2000 - Pulp, then I think Lee and Jayne: the Internet is for Porn. Later on we had Jan: Du Hast - Rammstein, Cornelius: Bad to the Bone - George Thorogood, and a few from Peter K including Auf Gute Freunde - Boehse Onkelz. I did Psycho Killer - Talking Heads, Firestarter - Prodigy, In These Shoes - Kirsty MacColl, we had several from Jorn including a beautiful duet with Jayne, who I think maybe did Fairytale of New York: the Pogues with Lee? And we had another from Andy, dedicated to Peter, more from our resident professional Lee, but I still have holes in my memory that I hope you can all fill - including what Thomas sang?
Top

Danny did Wonderwall - Oasis.
I did I was made for lobbing you - Kiss and the duet with the lovely Jayne was Where the wild roses grow - Nick Cave feat Kylie Minogue.
-----------------------------
Winner of The Silver Cup 2019
Lifetime Achievement Award 2015
Founder of FÖKOF and FAKO
The Aftertouch Podcast.
Wayne's and Nick's Carreer Ender
The People's Lockout!
Il portiere è mongoloide!
Top

As far as I remember, Lee started with a faboulous performance of Sweet Transvestite from the Rocky Horror Picture Show. Just glad, he didn't perfome in fishnet stockings and straps.
And my version of Bad to the Bones was from ZZ Top.

If you want to have all the songs together, why not create a YouTube playlist ?

Anyway it was a great fun. Just sad, that so many of us missed this fantastic show.
Top

Unfortunately (or fortunately!), the youtube stream for Saturday stopped recording after 12 hours, so the Karaoke session was not recorded anywhere and therefore cannot be seen again apart from in our memories!

Oddly, youtube automatically chose this epic image to use as a thumbnail for the live stream: 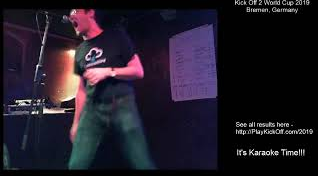 Steve Camber wrote:Unfortunately (or fortunately!), the youtube stream for Saturday stopped recording after 12 hours, so the Karaoke session was not recorded anywhere and therefore cannot be seen again apart from in our memories!

Oddly, youtube automatically chose this epic image to use as a thumbnail for the live stream:

Next time i think it is better to plan the Karaoke first and fun cup (drunken master 2Vs 2) later!
I prepared a couple of songs but I was dead tired! I've not your stamina!!!!

Users browsing this forum: No registered users and 10 guests